Attached is my CMP for anyone who wants to take a look.  Hope everyone has a wonderful two week break from both schools!

I found both articles very interesting and eye opening!  Apparently the middle school years are more important than I thought.  You always hear about, or see on TV and movies, how the popular kid from high school has fallen from grace as an adult. I have never heard, or have thought about it being the case with the popular kid from junior high!  But it turns out, according to the study, that the popular kids in junior high – who crave acceptance/popularity – are more likely to become “losers” in early adult life. But it makes sense, as the article states it’s “normal” for mid and late adolescents to partake in sexual activity or partake in some delinquent activity, but not so for 12-14 year-old kids.  I think this article is an eye opener, and can be very useful for teachers, staff, and parents at middle schools.  Although it is not a guarantee that a student displaying pseudomature behavior in junior high will struggle as an adult, I wonder, if out of the pool of pseudomature behaving students, if the percentage of  girls who turn it around and have a successful adulthood is higher than the boys?

Looking back to my junior high years, several of the desperately popular kids either became teen parents during or immediately after high school, some were involved in abusive relationships, and others became wrapped up in drugs and alcohol (one of whom lost a great basketball scholarship after his freshmen year).

I observed a fellow History teacher at my school, and his class was working on a small project they had started the day before, so it was not a traditional lecture style class.

To open the class the teacher reiterated classroom rules and policies after the greeting.   Something along the lines of “no cell phones please, cell phones stay in your pocket.   If you didn’t bring your materials to class you may not go to your locker so don’t ask, you were told yesterday what you had to bring today.’ I instantly saw cell phones going away. These rules/procedures helped create a “work’ mentality and reduced common class disruptions that occur, especially at the start of class.   During the class, teacher continually walked around room, ensuring students are staying on task and stomping out any little “fires’ before they became a class management issue. Lesson closure teacher announced class procedures to clean up after the project — put supplies away, proper way to put away the iPads that were used during class, etc.   He watched them the entire time they were cleaning up making comments like “don’t throw the markers into the bin, put them into the bin’ or “plug your iPad in please”.   Reiterating these procedures and keeping a watchful eye  made the clean-up smooth and successful, he did not have to go picking up markers or scissors nor did he have to sit there and make sure all the iPads were plugged in.

The first transition I saw was the way he got the students from lunch mode to class mode.   He greeted each student as they came in. As the class was filling up he walked around and started making small talk with students about how their project is going, what they chose to do, etc. so they are having a social conversation, but it’s about class work before class even starts.   Students were able to get their talking out of the way as they shifted their mentality towards the classroom, so when class began they were ready and able to listen.   Another transition I witnessed was the class going from directions/lecture to student work time.   Here he reiterated the procedures from grabbing iPads and project supplies before letting the students begin their independent working time.   This reduced any chaotic rush of students to the iPad cart or to the other project materials, it was all very orderly.   The last major transition was the ending of independent work time/end of class.   In similar fashion, and mentioned previously, teacher reiterated procedures for cleaning up the classroom and monitored the process to ensure everything was put away correctly and with care.

What I saw that was most beneficial was the establishment of rules and procedures and the continual reiteration of them.   My mentor does not have rules or procedures in her classroom, and often times that can lead to some “chaos’ in class, especially on days where students are working in groups or independently on projects, or with technology.   As a result, my mentor or myself will spend five minutes after class or so cleaning up materials left on desks, plugging in iPads or computers that the students did not plug in, etc.  So I think having rules and procedures are very helpful in classroom management and equally important is to continually reinforce the rules and procedures as well as monitor the students as they perform them. 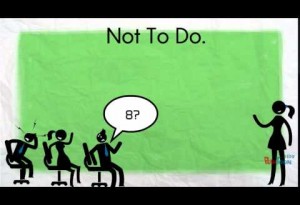 This article gives five examples on how to connect with your students.  A few of the author’s suggestions we have discussed in class.   His last two suggestions stood out to me and I think they are two very important ones that are often overlooked.   The first being to attend the extracurricular activities of your students, the second is visiting a site in your students’ community. Students appreciate teachers that make an effort to know them outside of a classroom setting.

This blog talks about eight ways to build a positive school culture.   Several of the items on her list we have already discussed in class, however the number one item on the list is building strong relationships between the students and teachers/staff.   Other items on her list include being a role model and praising students for good choices, these two acts will also help foster positive student-teacher relationships.

This short video may seem a bit cheesy and obvious, but it can serve as a quick reminder of how teachers should treat their students in order to maintain positive student-teacher relationships. 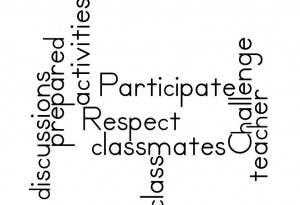 #1) Respect yourself, classmates, and teacher

#3) Participate in class activities and discussions

To me the most important rule is number one, because in theory if the student respects themselves everything else will fall into place.   I also hope to challenge students and want to encourage them to challenge themselves.   The last two rules are pretty commonplace, but in my subject areas a lot of time is spent in class/group discussion or work. If the student is unprepared — didn’t do the reading, didn’t bring textbook to class can have a major impact on the direction the lesson will go. The more prepared students are, the more beneficial they will be to themselves and classmates.

ASCD (Association for Supervision and Curriculum Development) helps provide information, educational leadership, and solutions for educators around the world.   If you go to their website,  https://www.ascd.org, the ability to search the site for any topic is available to you.   I did a quick search on “classroom management’ and numerous results came up in the form of academic journals, excerpts or complete chapters from books, and videos.   You can become a member and get some exclusive benefits such as access to webinars, but a membership is not necessary to reap the benefits of the resources found on this site. 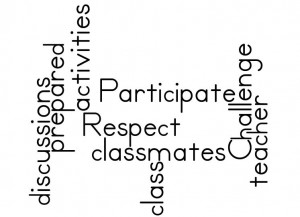 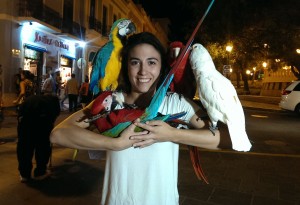 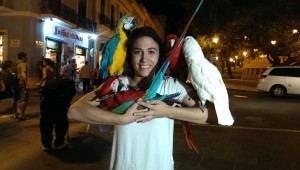 Like many  of you, I am pursuing my secondary teaching certificate as well as my Master’s in Secondary Education.  I graduated this past May with a bachelors in History and a minor and Economics and am currently doing my internship out at North Pole High teaching 10th grade World History and Government to seniors.  So far, so good!  I hope this next year will help me become more knowledgeable in all the administrative duties of teachers (lesson plans, Danielson, IEPs, etc.) I’m looking forward to learning a lot of classroom management skills because although I think I can manage your average classroom fairly well (my students are super awesome this semester!) it has to be one of the major areas I lack confidence.

On a more personal note, I was born and raised here in Fairbanks and graduated from high school in 2005.  I went to college originally for engineering, then took a long break before heading back to college in 2011.