This article was enlightening but so sad to see the struggles the next generation is dealing with, especially with something so shallow as social media. It puts an unrealistic expectation on young people, especially girls. As a middle school teacher, it’s so easy to see self doubt and insecurities in my students. They are still coming into who they are and who they want to be. My goal is to give them the best education possible and teach them responsibility and respect to sent them up as best as possible to be successful in the future. This doesn’t mean all A’s or top universities. This means feeling accomplished when they succeed and learning from their mistakes when they fail – teaching them that it’s okay if they don’t understand or don’t get it, but encouraging them to work hard and the hard work always pays off. As a teacher, it’s not always about the academics. It’s about giving students confidence and molding students to be kind and compassionate. A lot of self destruction and depression can come from bullying. If people are so worried about how strangers see them on social media you know they are worried about how their peers directly around see them. How cruel and heartbreaking it was for Ms. DeWitt to see that text of her classmate splash across his screen. I want to teach my students that it’s not what they do that establishes their success but what their character is and how they treat others. So even though Ms. Dewitt had acne and maybe wasn’t the prettiest girl, hearing or seeing comments like that text, yes would hurt, but would not attribute to the feelings of inadequacy. Social media teaches your worthiness – your identity – is on the outside, but what makes a person valuable is what is on the inside. Sometimes teachers are the only adults in a student’s life who can encourage, train, and influence in a way that can change a path of desctruction, even suicide, to a path of confidence and strength, no matter the failures you will  encounter. You learn and grow from the experience and remember it does not define you!

I currently teach 6th and 7th grade and am observing an Algebra 1 class during my prep time.   I will answer the prompted questions as a self-reflection of my current classroom management strategies and add some of my observations in as well. I for one think that one of the greatest strategies for starting a lesson is “Think, Pair, Share”. I have seen this done by other teachers and adopted it into my own teaching style now. “Think, Pair, Share” as a lesson opener gives students a chance to make their own connections to the subject presented by having a time to “think” about what they already know and share it with their peers. I also think that it is helpful to start lessons of with some form of connection to each student, whether it be a story or interesting fact that catches each students attention. During a lesson I always try to stop frequently and check for understanding instead of just blowing through the material.

3 common transitions that occur on a everyday basis for me are: Moving over to using laptops, leaving class, and entering class.

When it comes to getting laptops from the cart for in class use, I manage the chaotic transitions by releasing students in groups and not as a whole. In order to cut down on the rush of leaving the classroom and cleaning up all at the same time, I give students ample time to get the classroom all clean before leaving the class and then I make sure that they have all pushed in their chairs before they leave. For the transition of starting class I have simply implemented “bell ringers” which have proved to work wonders.

One thing that I have observed a teacher do that I would like to implement into my classroom is raising my hand to get kids to listen. I currently have a vocal cue where I tell the students to clap once and they do that then get quiet. The problem here is that if it is loud then I have to yell, which is not fun when your job requires you to talk all day already. So, I would like to implement a silent Que for students to listen.

I found these articles to be very uplifting and encouraging. Maybe not for the way we are currently doing things, but as a relief to teachers that you don’t have to know it all and get the perfect test scores. School is about education and meeting the mark to a certain extent, but it is also a place to learn compassion, social skills, friendship, respect. I really liked point 5 in “What I Wish My Professor Had Told Me”. I have sat through so many MAP & PEAK test score meeting and listened to all the talk about how bad 6th grades scores are and I do understand the concern, but I do not think that should be our primary focus and it sometimes seems to be. To qoute the article,    “Those children in front of you are just that–children. They’re not data points.”

I also really liked how the other article redefined success outside of the realm of test scores.

This topic really stumps me if I am being honest, because I feel like I have to choose one side or the other. Personalized Education sounds so good from the side that class and lectures can be boring and freedom in education could make more kids want to learn, but it also sounds horrifying when you think about less structure leading to less caring in some students. I found a lot of great things about Personalized education when researching it. For starters, “It embraces the highly defensible tenet that learning has to happen  in  students, not  to  them, and it recognizes the reality that the diversity of students in today’s classrooms makes it impossible to claim that one-size-fits-all learning makes sense.” (Tomlinson). I believe that everything should be done in moderation and that remains true when I am looking at this topic. I believe getting rid of curriculum and letting students decide individually what they want to do would leave a lot of kids lost in the future.I know if I had a choice when I was in school not to do math, then I would not have done it, because I hated math. Now, because I sat through all those classes and grudgingly learned the content I am able to use math and the real worlds and found out that I actually love math. I think the biggest issue with Personalized Education is that it focuses on letting students learn whatever they want to become whatever they want, but doesnt give them the foundation they need to do this. “What a child is capable of learning depends upon what she already knows. When a child encounters new information, if she lacks the preexisting knowledge to put the information in context, she will quickly become frustrated. She won’t learn. So to the extent personalization seeks to devolve a greater degree of the responsibility of acquiring new knowledge to students, it relies on the mistaken assumption that many or most students are properly equipped to make sense of new information”(Riley). Too much freedom can be a bad thing, just as not enough freedom can also be a bad thing. My school currently uses personalized education in the since that if a kid is excelling in a subject they do not make them stop at whatever grade they are supposed to be in according to their age. They allow those student to keep bumping up to whatever grade they are understanding the content and being challenged at.

If I am being honest here, I do not get very involved in politics unless it has something to do with the natural world (ex: the recent news on national monuments like Bear’s Ear”. This subject on DACA however caught my attention the moment I heard about it. I will say with shame that the first time I heard about DACA was while scrolling through Facebook. A video raising awareness for immigrants popped up and it was so shocking because most of the people in the video where well educated, English speaking people, who I would consider to be Americans.

In my opinion DACA was a great way to add grace to a system that is often times lacking compassion for others. DACA from what I have read has some pretty steep requirements that I think gets rid of the immigrants that we don’t want in this country and brings in the ones who can help contribute to society. To summarize the requirements to be eligible for DACA, you must have been under 31 at the time DACA was put into place (June 15, 2012), you had to have been in the U.S before your 16th birthday, you must have lived here since at least 2007, you cannot have any felonies or more than 3 misdemeanors, and you must have finished high school or working towards it. That is a lot, and it seems to me that the people who meet these requirements deserve to stay.

A big thing that I cannot wrap my head around is that a baby could have been brought to the United States in 1982 with no knowledge of there parents breaking the law and lived here all their life. Now being 36, they are told to leave their home country? Do I have this mistaken, because I certainly could, but this is awful! Another thing that makes me upset about removing DACA are the students who are in college that are protected under DACA will be forced to leave, when just like all of us they are trying to be successful and educated and achieve the   “American Dream”.

From the research I found online the terminating of DACA is still on hold and immigrants can still apply for renewal or first time protection under DACA. “Results of an NBC News/Wall Street Journal poll released in December found  62 percent of those polled wanted Congress to continue DACA, while 19 percent said Congress should take no action and let it end”(Gamboa). It seems that the majority of the United States citizens have to problem with DACA and think that it is a good program, so if we are truly a Democracy then why not give the people what they want?

Well, again I don’t know much about politics, but there is my two cents. 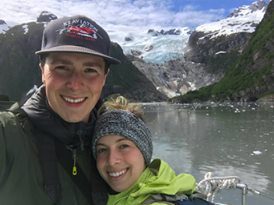 My name is Joshua Sandifer. I am originally from Greenville, South Carolina where we say “Hey Y’all”.My wife and I made the big decision to move to Talkeetna, Alaska this past April, 2018. We had spent the summers in Talkeetna before, but felt that God was calling us to live in Talkeetna permanently. We drove the 5,000 mile trip with a friend and got to see a lot along the way like Banff, Jasper, Badlands, Jackson Hole, Yellowstone, and more. I have a love and passion for the people of Alaska and moved to this state with a hope to better serve my direct community and the greater community as well. I also love working with kids and educating people in general. During the summers I work as a Naturalist Guide in Denali for a company called Alaska Nature guides. Things I love are: God, my wife, my puppy, hiking, climbing playing guitar, music in general, and tacos! I am really excited to be working towards my Masters in Education and hope to get the chance to connect with some of you guys along the way and learn from this diverse group of people. 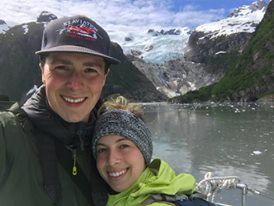