Hey you all, my paper is too long to post and so here is a little piece of it.

Classroom management can be scary, haphazard and at times an unpredictable mess or it can be a mixture of magical elements finely stitched into to an educator’s repertoire. I want mine to be the magical finely stitched kind not the unknown nightmare scenario. Some educators stick with what works, or what doesn’t quite work. Stubbornly insisting that was how they were taught. Some educators read books on the subject matter, constantly keeping their ears and eyes open for new ideas. They might discuss with colleagues, take classes and research endlessly on what will help them in the classroom. The trauma of a chaotic classroom, that cannot seem to be contained, could unfold in any classroom. It can hinder the education of the students and the mindset of the teacher. It is the frame works and guidelines that educators build up within their classrooms that will help keep a safe inviting space for learning intact.

It’s a difficult thought to consider the number given of undergraduate suicides happening on campus every year being so large. This article was written a couple of years ago and the approximate number was 1,100. I really appreciate this traveling installation Active Minds sets up with the symbolic backpacks. In my practice as a teacher I love to keep students open to the idea of total fantastic success with their art pieces while simultaneously being aware that disasters do happen. Sometimes, I feel like an over-zealous side line coach saying go for it! Don’t worry if you crash…we’ll just make a new one or work out that happy accident! Bless you, Bob Ross, for being such a gentle guide. When the students are able to ease up and approach it with the idea that failure does happen and that we can start again or just work with what transpires, most of them do make something out of those ‘happy accidents’. There definitely are some kids that are not soothed by this adventure into learning approach. Some look as if their insides are twisting at the thought of it. How do we help those kids know its okay to fail if they’re programmed to believe otherwise? I feel that if we are trying to avoid so many students feeling a sense of isolation or shame we should be providing a more bountiful amount of camaraderie in the classroom. Maybe have more chances for project based learning that isn’t geared toward grades.

My mentor teacher is very hands off and even jokingly says she doesn’t really want to talk to the students too much. The classes are focused around work days. With only a few lessons per quarter. Individual students do ask questions and receive one on one instruction aside from the large group instruction. I understand her wanting to keep less chaos in this room due to the machinery, tools and all the sharp and/or explodable stuff. When she is beginning a lecture she asks for absolute quiet, no phones, stop talking, watch the screen or her. Pretty basic but necessary. During the lesson she reinforces the major points and sometimes draws on the board for clarification. Lesson closure is really about students getting to work on said project but she does ask for questions. Another common transition scenario is the leaving of class. She really wants to be dismissing the class. This is kind of a gray area. Some of them are at the far end of the class and have to make it to the other side of the school on a different floor. Today she went over expected behavior for that and kept the 3rd period kiddos for three extra minutes. So, while she did not make any new friends today, she made her point by reinforcing her desired transition style.

To open a lesson and to transition the class into receiving direct instruction, she will turn off the lights to gather their attention. Next she will ask for silence. She gives a brief explanation about what the presentation or message is about, gives them a time she wants to start and then turns the lights back on.She gives the students a few minutes to allow for them to get to a stopping place and to be more ready for the transition from working into listening mode. So far it has been pretty successful and giving students a start time anywhere from 5-15 minutes away allows for a smoother transition. This is a strategy I will try to utilize in the future.

The Jennifer Collins article made me smile a little. She breaks it into 6 steps. 1.You will need armor. Loving kids is great but you will need more due to the demands of the job. The armor is the self confidence built out of the belief that you can be a transformative teacher. 2.You will be stretched beyond your limits in many different ways. I love the quote she gave from the veteran teacher from her past,“You are what the kids need you to be at that moment.’  The bandaid for the invisible cut was and is still a classic. Sometimes that bandaid is rescuing a different part of the student. They might just need your compassion at the moment. So, the different hats advice is something I totally agree with. 3.Keep those bad class pictures. This part I loved. You can just feel the emotion radiating off of her words. Poignantly being reminded of the students that might have driven you a little crazy while looking at your funky hairstyle and clothing choices. 4.Dismissing the idea of a perfect lesson. I think this one was pretty great too. Because everyday is so different, all the individuals working together on learning something will always shape your lessons a bit, no matter how you plan. 5. You’ve got to care that these are special little people even if they are rowdy and they might have to learn how to behave socially. If you build good rapport with students, classroom management will be smoother. 6. Don’t give up. Well, that one is pretty straight forward but I will most likely still keep my daydreams alive and well. For all those other fabulous jobs like marine biologist, zoologist, tree-house mansion builder, astronaut.

The  Elizabeth Bondy and Elyse Hambacher article was an article we went over as a group in class and it brings up so many  important ideas to consider as a teacher and as just a fellow human being. Don’t assume seems like an important take away. Don’t let statistics skew your view of students’ potential. Expecting greatness from your students is okay and may just be what they have been waiting for. If I had a dollar for every time a professor rolled their eyes about someone having lofty ideas of transforming the world around them. I could take us all out for dinner. I think hope, overhauling students’ deficit views of themselves  and teaching with urgency are the parts of the article that ring so loudly for me. I love the notion of working to make the world a better place. Great article :o>

This is so huge. Oh, my goodness.  I think if we scaled down the amount of students per instructor,  we could do it for sure. Then after we got rid of some of the standardized tests, we could branch out even more. If we could write some grants for devices or field trips, specifically asking GIANT businesses to help sponsor some of these ventures, we could have more help getting this personalization out to more kids. If we could all be doing a four day work week…anything is possible! Seriously, though it is a beautiful concept and one that I’m sure most of us are aspiring to in the classroom. It is also simultaneously a catch phrase used by people, who have never really worked in a classroom. Sometimes I feel the word, personalized, is being floated around by some like they are having a creative genius moment while simultaneously getting to the root of the “problem with education”.

As I’m writing this response the number for our population keeps increasing. Because yes, people have babies and people move here. Some of us move to other countries too, so our population fluctuates.

People cross borders. People make new borders. Some borders are made of tape, some of threats, some were made a–forever–amount of time ago. These borders have been recorded on maps and in books. We tell stories about them, we shift the edges of them through deals and through swindling. Laws have been made since the beginning of time and changed again to suit the people who think they are most entitled to the land the borders contain. Who said it was theirs to begin with?

Just like time, gods, love, magic and all sorts of other stuff. It is fascinating and frustrating all these laws we make. Some laws are for the safety of society, I get it, I do, I want to be safe. I want to enjoy the act of living. Societies can be safe places. But, societies don’t always stay safe. There are people who act out in obscenely inappropriate ways. These individuals are not usually acting for the common good of the society. Systems are set up to keep misbehaving people in line or away from the majority of our societies. Some people are killed for wrong doings. Some people are imprisoned for their whole entire life and they actually were not, I repeat not the perpetrator of the crime they were accused of. People live in fear of others acting out against them and their families, or taking something from them.

The DREAMers have to have clean criminal records. These 800,000 DACA recipients have to be enrolled in high school or college, or serve in the military. Their status is renewable every two years. I mean- come on, these are respectable, functioning members of society. There was some thought put into DACA, like how to protect these people. These law-abiding people. Now someone with a huge #$@&%*!  mouth has to try desperately save face with what he was bashing during his campaign and crash it all down. Uh, no.

Natural boundaries I get. Oceans are too huge for me to swim across. I don’t want to cross the Mississippi river, there are ridiculous sink hole type formations that can suck down a human body without a trace. There are mountains, beautiful mountains that I would love to visit but not necessarily move across to relocate my residence. The thing is people have crossed these seemingly unsurpassable natural borders to relocate since the beginning of time, to get to a safer place, or a cleaner place, or a place where the animals are moving to. Let them pass and live your own life. We have laws for behaviors, I just feel laws for territories are crazy. If you can participate in accordance with the law of the society you want to live in, then what is the problem? Oh yeah, resources. 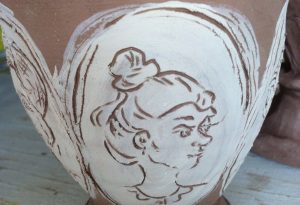 Hello, my name is Joelle Howald. I’m taking this course as part of the K-12 Art Licensure Degree Program. I was born in Corpus Christi, Texas. Spent time growing up there and The Woodlands, near Houston. Then moved to Clearwater, Florida as a teenager. Living in and around beaches, forests, swamps and meadows has given me an unwavering fascination with nature. I love making art, gardening and books.

I’m looking forward to learning as much as I can about teaching, while in this program.

My student teaching assignment this fall is metalsmithing/jewelry at Dimond High, which so far is totally rewarding! I love working with metal and the highschool students are pretty awesome too. I live in Anchorage with my husband, Nathan Shafer, who as you can see from his photo is a centaur. 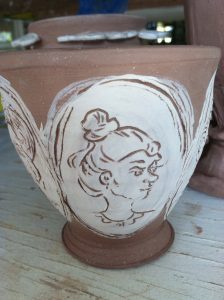