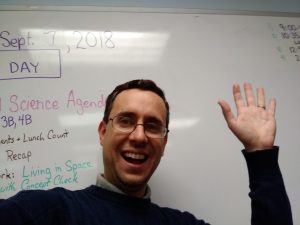 Greetings, all!   My name is Richard Craig Reifsnyder, a.k.a. “Mr. Rich,” and I’m thrilled to be entering the realm of teaching science up in Alaska!

I was born in Cincinnati, Ohio, and lived most of my childhood in Louisville, Kentucky.   For most of my life, I’ve been excited by space exploration, ever since reading Bruce Coville’s  My Teacher Is An Alien and a reference book on the Solar System published just after the flyby of Neptune by Voyager 2.   My time at Space Camp in junior high school convinced me to become a rocket scientist.   I got my Bachelor of Science at MIT (Class of 2003) and my Master of Science at Georgia Tech in 2005, both in Aerospace Engineering.   Straight out of graduate school I was hired into NASA’s John F. Kennedy Space Center in Florida, to work on the Space Shuttle’s Orbital Maneuvering System and Reaction Control System (the engines on the Orbiter that operate after External Tank separation).

When the Shuttle retired in 2011, I worked on the ground systems to load propellants into the Crew Exploration Vehicle, while considering a number of other directions my career could take, such as private rocket startup companies.   At the same time I met my amazing wife Karita, who was born and raised in Kenai.   Her mother has taught special education in Fairbanks for many years, and informed me of Alaska’s desire for math and science teachers.   I came to realize that this could be a grand new adventure, which would spread my love of science to a new generation of brilliant minds!

I am pursuing the Teaching-While-Training certification option, and have already begun teaching Physical Science at the Galena City School District.   I now live in Galena, 200 miles west of Fairbanks on the Yukon River, with Karita and our wonderful kids Liana, Aislinn, and Vincent.   In Florida I had the un-scientific hobby of acting at a community theatre, but I’m not likely to have time for that again until I’ve earned my Master of Education from UA Fairbanks, two years from now.   I do want to enhance my curriculum (once my teaching methods are smoothed out) with extracurriculars like national math and science exams, model rocket launches, and Quiz Bowl matches.

There are many fields of scientific study, but the term  science refers to the process for understanding the nature and behavior of the universe.   It enables us to see the sublime beauty and poetry of the world around us as it  is, not just as we wish it could be.   If I can get students to look at a little piece of the giant puzzle, to make a connection no one has made before, then they would have expanded humanity’s horizons in ways we can barely even speculate today.