Earlier this week I wrote a piece for my Alaska Native Literature class that treads a similar line of conversation as our article by Paul Berg. When I first read articles like this I’m totally sucked in; it’s forceful and simply blazes with passion. But when I take a step back and really look at what’s he’s saying I just have to wonder, is he being realistic? What I wrote for my ANL class was about balancing the romantic notions of the past with a realistic vision for the future of Alaska Native cultures. We so often read about what was lost, arguments built entirely on pathos and nostalgia. But it’s unreasonable to believe that elements of the past can be completely restored. It shouldn’t be about living in the past but about reconciling the important aspects of their culture with the future because that is how it’s going to survive. I’m not sure if the Alaska Native community will ever obtain the level of autonomy that Berg is calling for, but I do think we have the opportunity as educators to at least empower Alaska Native students.

When we try and tackle the topic of Alaska Native education I think it needs to be approached with a level head, which seems hard for a lot of people to do. Again, we have to be respectful of cultural differences and the Native community’s pursuit of reclaiming their heritage, while still understanding that we live in a Western society that runs on a certain set of standards that probably will not change any time soon. We are dealing with romantic ideals on both sides: Native students will be educated through a Native based system versus Native students will comply with Western standards. I don’t think we’ll be successful in either extreme, and to create an integrated system it’s important to use real pieces of both and not symbolic stand-ins. What I find hard to grapple with is the argument concerning the need for a Westernized education when it has little relevance in a student’s everyday life in the village, especially if they plan on staying there. But after reading Berg’s article and his complaint (voiced twice) that outsiders have all of the middle-class jobs in rural Alaska, wouldn’t you want the younger generation to have to skills to fill those positions as teachers, medical workers, etc.? Something tells me Berg would still not be happy with this conclusion.

I have to confess: I HATE reading the comments for online articles. The relative anonymity that is granted through the internet allows people to word-vomit their particular opinion in the most offensive ways. What I found most interesting in the comments section of this article was how people thought that our current public school curriculum wasn’t already ethno-centric or promoting one culture over another. These commenters’ big complaint was that we shouldn’t be forcing one specific culture on the students through Alaska Native classes. What culture do they think American public schools espouse right now? Ugh, painful.

For anybody who is interested, here is a visual representation of the curriculum for 2012-2013 used at the Effie Kokrine Charter School in Fairbanks. I’m really interested by what they’ve created there. 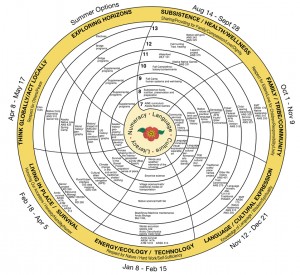